Most other dome companies offer 2×4 struts as standard or at best 2×6 as standard. Very few will even offer 2×8 as an option. Why? Probably because it’s easy and cheap. For them, that is.

We learned (several hundred domes ago) that a 2×6 dome is not enough.

When Natural Spaces was formed in 1978, we had learned from eight years of dome building and the energy crisis that old building methods were not going to carry us into the 21st Century.

We learned how to manufacture a 15″, 18″ or 21″ wide strut for the same price as our 2×10 strut. We learned how to produce and sell them for less money than our competitors 2×6 dome system.

Why do you need such a thick strut? To add more insulation and provide for wall cavity air ventilation.

Is there a maximum “R” value or a point of diminishing returns? The additional investment you are making in the Super-Wal is so small that you a get a fantastic return. If anyone can predict what the world energy picture will be like 10, 25 or 50 years from now, we’ll tell you exactly what the pay back is. Just think back 20 years ago. Now, don’t you want something more than a 2×6 dome?
We also made our Super-Wal system easy to erect. Being pre-assembled, you don’t have to go back and add anything or tighten or align anything.Once you pound the bolt in place, your framework is locked rigidly together. You erect your double-strut dome framework in one day in one operation. 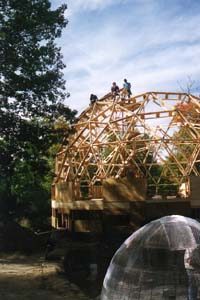 49′ Mid-Profile – Brainerd, Minnesota (small 20′ dome – to be covered with concrete and buried under dirt

Because we use safe, economical fiberglass batt insulation, we have developed standard Super-Wal sizes:

Two 6″ batts are cheaper than one 12″ batt. We notch our struts and set back our sleeve to allow airflow between panels.

Our Super-Wal double strut system is not a new, experimental system. We’ve been building it for years. It’s practical and economical to build. Best of all, it will save you thousands of dollars in your future fuel bills, providing you comfort of mind and body.

As leaders and pioneers in the field of dome home technology, Natural Spaces has developed a dome wall ventilation system that provides for continuous natural air circulation over the entire fiberglass insulation surface.

Air enters at the bottom of the dome shell through a flared base vent skirt with screening, rises as it is warmed by the sun, and escapes out of the top low profile vent cupola.

The air being vented carries with it any moisture-laden air that has migrated into the wall cavity from the inside of the dome.

Most other dome companies ignore the condensation problem or simply don’t know it exists.

The use of both inlet and outlet vents in attic and roof spaces aids in keeping the air moving and preventing the accumulation of frost or condensation on roof sheathing in cold areas. “Dead” air pockets in the roof can normally be prevented by good distribution of inlet vents in the soffit areas. However, there may still be a need for vapor barriers; ventilation alone, when insulation is used, does not prevent condensation problems.

Dome companies that use rigid insulation, cutting it to fit within the triangles, may have a serious condensation problem because the insulation board does not fit tight to the outside panel. This leaves a perfect space for vapor to condense on the outside panel. (This holds true except for coastal areas and the far south.)

The only kind of insulation not subject to this problem is sprayed in place urethane. This material, when properly applied to dry wood, does not allow vapor to penetrate. However, there are other details to be dealt with correctly when using foam. Urethane is also more expensive than fiberglass, but it has twice the R-value.

Condensation can be described as the change in moisture from a vapor to a liquid. Water vapor within the house can migrate through the wall or ceiling during the heating season to some cold surface where it condenses, collecting in the form of ice or frost. During warm or sunny periods, the frost melts. When conditions are severe, this meltdown in non-vented spaces may drip to the ceiling below and damage the interior finish. OSB sheathing may swell up. Insulation becomes wet and looses it’s resistance to heat loss. These problems can be reduced or eliminated when proper construction details are used.

The control of condensation through the use of vapor barriers and ventilation should be practiced regardless of the amount of insulation used.