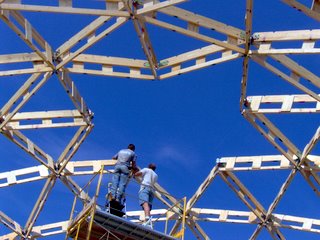 Most other dome companies offer 2×4 struts as standard or at best 2×6 as standard. Very few will even offer 2×8 as an option. Why? Probably because it’s easy and cheap. For them, that is. We learned several hundred domes ago that a 2×6 dome is not enough.

When Natural Spaces was formed in 1978, we had learned from six years of dome building and the energy crisis that old building methods were not going to carry us into the 21st century. So, we invented the Super-Wal double strut system providing a true super insulated dome system.

When you buy a dome shell system from 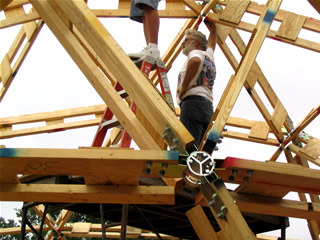 us, your Super-Wal struts come pre-assembled with sleeves attached ready to erect. You don’t have to be up on scaffolding putting in nuts and bolts on your struts.

We learned how to manufacture a 15”, 18” or 21” wide strut for the same price as our 2×10 strut. We learned how to produce and sell them for less money than our competitors 2×6 dome system.

Why do you need such a thick strut? To add more insulation and provide for wall cavity air ventilation (in certain climate zones).

Is there a maximum ‘R’’ value or a point of diminishing returns? The additional investment you are making in the Super-Wal is so small that you get a fantastic return. If anyone can predict what the world energy picture will be like 10, 25 or 50 years from now, we’ll tell you exactly what the payback is. Just think back 20 years ago. Now, don’t you want something more than a 2×6 dome?

We also made our Super-Wal system easy to erect. Being pre-assembled, you don’t have to go back and add anything or tighten or align anything. Once you pound the bolt pin in place, your framework is locked rigidly together. You erect your double-strut dome framework in one day in one operation.

Watch the short video to see a 40′ diam. low profile dome framework being erected in 4 hours.

In certain climate zones, we notch our struts and set back our sleeve to allow airflow between panels to eliminate condensation issues.

Our Super-Wal system includes the riser 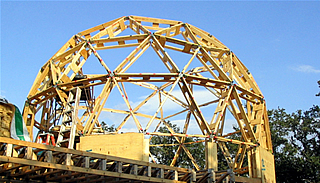 wall and the view cupola. It’s a total ultra superinsulated dome shell from the floor up.

Our Super-Wal double strut system is not a new experimental system. We’ve been building it for years. It’s practical and economical to build. Best of all, it will save you thousands of dollars in your future fuel bills, providing you comfort of mind and body.

A Natural Spaces dome uses 3/4” exterior grade plywood for the exterior triangular sheathing panels. At a time when other dome companies were figuring out how to use thinner sheathing, we were looking at the quality of our system. 3/4” plywood allows us to ”freespan”” each triangle without requiring expensive and time-consuming bracing between the struts. 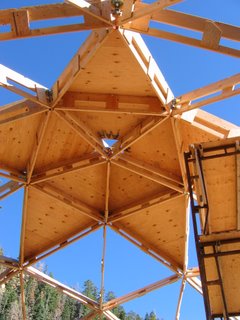 This is how we get a full triangle out of each sheet of plywood.

Our triangles are cut from 4’ x 8’ sheets that have a tongue and groove edge on each long side. It’s a plywood called underlayment grade, which is readily available from any lumber yard. When the two pieces of the triangle panel come together, there is a tongue and groove edge along the joint line. This creates a very stiff joint that does not require additional bracing behind it, except in very extreme structural loading situations.

We then use the rest of the plywood sheet to make our gusset plates for our super-wal strut, thereby almost completely eliminating any scrap. Other dome companies use 1/2” plywood or 1/2” chipboard. In order to use 1/2” plywood dome triangles, you have to add 2 x 4 braces at 16” O.C. to support the roof load. All of these braces create additional areas for heat loss to occur directly thru the framing. They also create dead air spaces and make it almost impossible to ventilate the wall-roof cavity. In other hub and strut dome systems this additional bracing adds tremendously to the time involved in putting up the frame, not to mention the additional costs which can be significant. Our system is much more resource efficient.

Chipboard or waferboard also has expansion problems with moisture present. 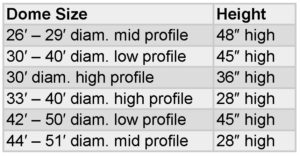 We can supply riser walls in varying heights up to 48″ high. We will work out the correct height in conjunction with your particular plan. Risers determine extension arch height, second floor height and main floor window height.

We don’t like to waste material. Our riser wall (shown below) incorporates the first horizontal row of struts as its top plate. On a 40′ diam. Dome this saves you 240 lin. Ft. of lumber. Our plywood sheathing runs down the face of the rim joist, structurally tying the dome to the floor and foundation. 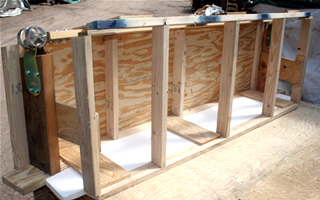 Our super-strong 3″ x 10″ corner riser “strut” has a sleeve structurally attaching it to the dome.
Our super-wal system uses the strut thickness as the riser wall thickness. Here again, we use inexpensive 2×4 studs on the outside and inside to save money. You then have a double wall riser (right), superinsulated for energy efficiency. 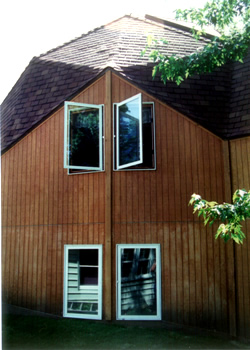 On our 26’/29′ models 500/625 sawtooth risers, we have altered the dome geometry and created a unique trapezoid shaped riser wall. The low point is 4′ and the high point is 8′. On these smaller domes this provides a vertical wall for less expensive conventional windows. This also has the advantage of providing a much larger loft area with greater headroom than is normally found in a standard 26’/29′ dome.

drawing at right shows a 36’ low profile model 950 with and without a 36” riser. In this case if you want a usable loft, you have to add a riser
wall. The 40’ diam. Low profile would add about 2’ of height to this drawing.

This altered geometry also provides two high extension openings directly opposite each other. The 29′ dome at left can easily be developed into a three bedroom home with 1500 sq. ft.

The height of the riser will also determine the height of the extension. A 36’’high profile dome has 6’-8”
between horizontal strut rows which is too low to fit a standard door with framing. So, you need a riser wall.

You want to also line up the second floor framing so 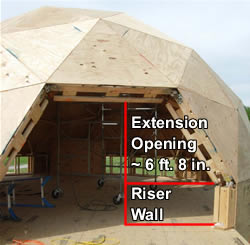 that it ties into the second horizontal strut band and this requires a riser (height depends on dome).

If you are building a low profile dome and are using a riser wall higher than 42”, we suggest you consider adding a band of triangles instead, making it a high profile dome. As shown at left, a comparable band of
dome triangles is more efficient than a conventionally framed wall. Because framing lumber has a much lower R-value than insulation, the more framing, the more heat is lost. 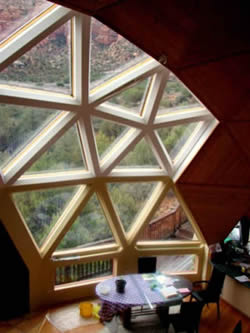 If you’re planning to build a dome on an 8’ riser wall, it just won’t look right; besides, we think you want a dome home not a dome-capped round house.

Another use of the riser wall is for the insertion of conventional type awning or casement windows to provide ventilation. Most windows would require a riser height of 26” to 28””as they are about 24” high.

We like to use the triangle windows for view windows because they don’t have any screens. Screens even when new, restrict up to 25% of your view. By placing a window with screen in the riser, you are able to draw in fresh, cool air at the floor.