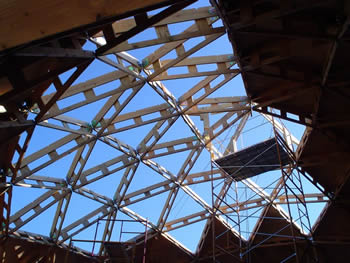 We, at Natural Spaces Domes, have engineered our dome systems using structural engineers since 1973. Our engineers have certified our plans in all 50 states and many foreign countries.

Using our Ultra-Lok connector, our dome system is structurally certified to meet the snow loads of Buffalo, New York and the Rocky mountains, the hurricane winds along the coastal regions in the Miami-Dade county Florida area and New Orleans, the earthquake country of Malibu, California, and Seattle, Washington and the tornado areas along the great plains.

The first professional engineer to work on our dome system was John “Jack” Hanley of Fowler / Hanley Engineers, Minneapolis, MN, in 1973.

Jack used his decades of engineering knowledge to provide solutions in the development of our early dome designs at our first dome company, The Big Outdoors People.

He teamed up with Engineer Robert Knudson of Environmental Services, Inc. in the mid 1970’s to provide sophisticated computer engineering showing the load characteristics of the dome at each of its nodal points. 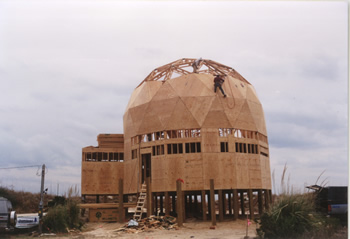 When Jack passed away in 1985, Natural Spaces Domes turned to Steven Winter Associates of New York City and Newport Beach, California. We were teamed up with a young structural engineer, Paul Durand.

When Paul decided to go off on his own in 1989, we followed. Since then we have used Paul (a licensed professional engineer / structural engineer) to provide certified, concise, accurate, site specific engineering for any of our domes in our 50 states.

We have also worked with engineers in Canada, Finland, Romania and other countries to provide appropriate engineering. Paul Durand’s engineering can provide a base from which foreign engineers can better understand our dome’s unique structural qualities.

For 43 years, our domes have resoundingly survived what ever Mother Nature produced.