Sen. Janet Johnson leaves important legacies behind
State Sen. Janet Johnson, diagnosed with a brain tumor in July, died Aug. 21. She accomplished more in eight years in the Legislature and 59 years on this planet than most of us can hope to achieve; but her real legacy is not just what she got done. It is also the way she lived: with integrity, passion and the courage of her convictions. Janet impressed many with her warmth, compassion and ability to reach out to people. In a time of growing cynicism about politics and government, her example is needed more than ever.

From the time she got to the Senate, Janet believed there might be a better way than the way things had always been done. She believed that if we develop new tools, new technologies, new resources, we could start to replace the old way. She was talking about biomass and wind energy back in 1991, long before other legislators. But she didn’t just talk — she successfully moved her ideas forward. Wind power is now the world’s fastest growing energy resource, and Minnesota is at the forefront.

It is certainly true that most legislators and other elected officials enter public life because of an earnest desire to make a difference — but the reality of their daily work is that too many issues become politicized and policy analysis often leads to policy paralysis. Janet Johnson navigated by her convictions and refused to fall into these traps. This was most dramatically evident in 1994, when the Legislature grappled with the issue of nuclear waste storage at NSP’s Prairie Island plant.

Janet was singled out by many for her courage in that fight. In April 1994, a news columnist described her as “a tough, smart legislator who out-pointed the opposition on her knowledge of nuclear energy,” noting that she was among a small group of women legislators who “had the brass to oppose party leadership and an intense lobbying blitz to vote against the bill to permit a nuclear waste dump on Prairie Island.” Her political courage stemmed from her deep commitment to creating a cleaner environment for future generations.

Though the 1994 NSP debate may have been her most visible moment, Janet fought the good fight on many fronts — both visibly and behind the scenes, often giving credit to others. As chair of the Senate Transportation Finance Committee, she pushed for light rail transit, commuter rail service and Amtrak rail service from the Twin Cities to Duluth. Her experience riding subways as a native New Yorker influenced her view of public transit in Minnesota, and she helped other legislators see its potential.

She also fought for consumers, going up against the telephone companies to restrict the practice known as “slamming,” or switching someone’s long-distance service without their consent.

And she was deeply concerned about the farm crisis. Rather than spouting quick fixes or tired old solutions, Janet emphasized new ways for farmers to attain long-term self-sufficiency. In her view, the promotion of organic agriculture represented one of the best prospects for reaching this goal. She also envisioned small groups of farmers owning their own wind turbines and earning income from clean, renewable energy.

Though representing an increasingly conservative district north of the Twin Cities, she was not afraid to take politically unpopular stands. When the bill adding sexual orientation to the state human rights law came up she said, “We just buried a good friend who died of AIDS — how can I not support this legislation?”

Janet Johnson’s most recent efforts brought together two of her top concerns — the environment and the interests of children. During the 1999 session she introduced “The Parent’s Right to Know Act,” which aimed to reduce Minnesota schoolchildren’s exposure to pesticides. Among other things, it required schools to notify parents if they apply certain pesticides. As Janet said at the time, “We cannot shield our children from all the hazards in life, but we can certainly take steps to minimize risk by reducing exposure to pesticides while our children are learning and growing into healthy adults.” This effort is not finished; the legislation was not enacted this year.

Janet used government as her means of winning results for children, for her communities and for Minnesota’s natural treasures. Her example recalls something Canadian mass communications expert Marshall McLuhan said: “There are no passengers on spaceship earth. We are all crew.” Our colleague took her position as crew member very seriously, rolling up her sleeves and going to work on behalf of her communities, our environment and future generations. She, and the further contributions she would have made, will be greatly missed by all of us. 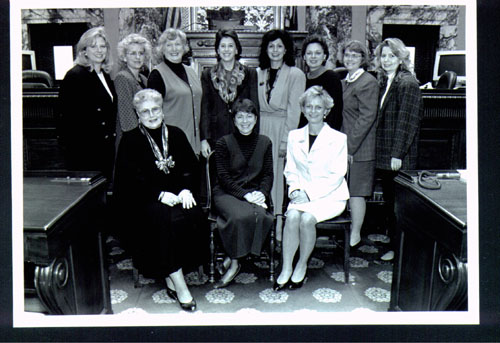