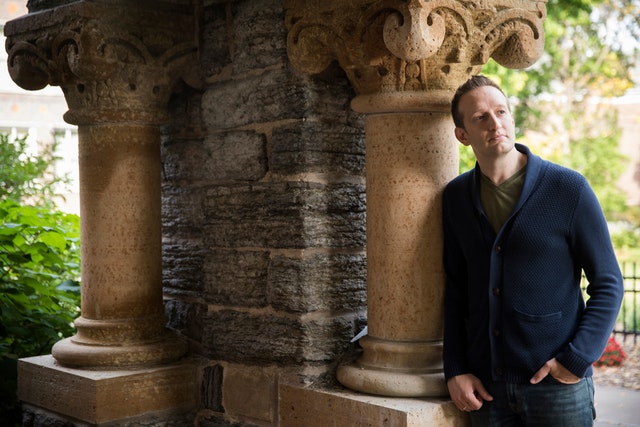 When Peter Bognanni had completed a draft of his second novel, he handed it around to a few trusted friends to read. It was a massive manuscript, more than 500 pages, with two main characters: a depressed teenage girl, and the girl’s father, who worked in the funeral business.

To Bognanni’s surprise, “To a person, everyone said, ‘The heart of this story is the daughter’s story.’ ”

Cut the dad’s story, they said. Shorten the book. Focus on the girl.

He did. He trimmed the book by 200 pages, made 17-year-old Tess the first-person narrator and relegated her father to a tertiary character.

And therein lay a second surprise: Bognanni came to realize that what he had written was not his second novel for adults, but his first novel for young adults.

“Things I’m Seeing Without You” will be published by Dial Books on Tuesday, the same day it will be launched at Common Good Books in St. Paul, just down the street from Bognanni’s office at Macalester College, where he teaches.

The novel is the story of Tess, whose internet boyfriend has committed suicide and who herself slides toward depression. Much of it is dark, dealing with depression, suicide, death and grief in the age of Facebook. But much of it is also funny.

“Funny and sad,” Bognanni said. “That’s the place I like to be in my books.”

There had been clues that Bognanni wasn’t averse to writing for teenagers. His first novel, “The House of Tomorrow,” was about a teenage boy who lived with his grandmother in a geodesic dome. It won the Los Angeles Times Art Seidenbaum Award for First Fiction and was a finalist for a 2011 Minnesota Book Award. It has been made into a movie starring Ellen Burstyn and Nick Offerman, which recently premiered at the San Francisco Film Festival and received a standing ovation. (“It was fantastic,” said Bognanni, who was happily in attendance.)

But “The House of Tomorrow” also won an Alex Award from the American Library Association — an honor that goes to adult books that have broad appeal for teens.

“I feel like there are fewer adult coming-of-age novels now,” Bognanni said. “If you’re writing in the first person from the point of view of a 17-year-old character, I think these days that’s going to land in the young-adult world. It took me a while to come to terms with it.”

He worried briefly that writing for teens might be considered less serious than writing for an adult audience.

“I think there’s a potential stigma, but when I started actually reading a lot of contemporary YA, it was like, no, wait, there’s actually a lot of really amazing stuff here,” he said. “And also a readership that is really engaged.”

Bognanni has begun work on his second YA novel, this one a little lighter, about a group of characters who try to save a beloved neighborhood movie theater. It’s based partly on the old Oak Street Cinema near the University of Minnesota, where Bognanni once worked.

From Iowa to Italy

Bognanni, 39, grew up in Des Moines and graduated with a degree in history from Macalester College. He studied at the Iowa Writers Workshop and returned to Macalester in 2006 to teach. He and his wife, Junita, have a 2-year-old son, Roman, named in honor of the city where they spent much of 2013.

“The House of Tomorrow” helped earn Bognanni the Rome Prize from the American Academy in Rome, an honor that goes annually to 15 emerging artists. Bognanni called it “a miraculous gift that fell from the heavens,” a year “just to fuel your creativity and allow you to think about your work.”

He worked on “Things I’m Seeing Without You” during those 11 months in Rome, and the last chapters of the book are set in Sicily.

“There’s death everywhere; it’s all over Italy,” he said. “Everywhere you look there’s a crypt or a statue or a graveyard or something like that. It was a pretty inspirational place to write about death. Rome’s a good city to think about your own mortality.”

He paused before adding: “And then you go outside and it’s beautiful outside and you eat a gelato.”

Funny and sad, just where he wants to be.